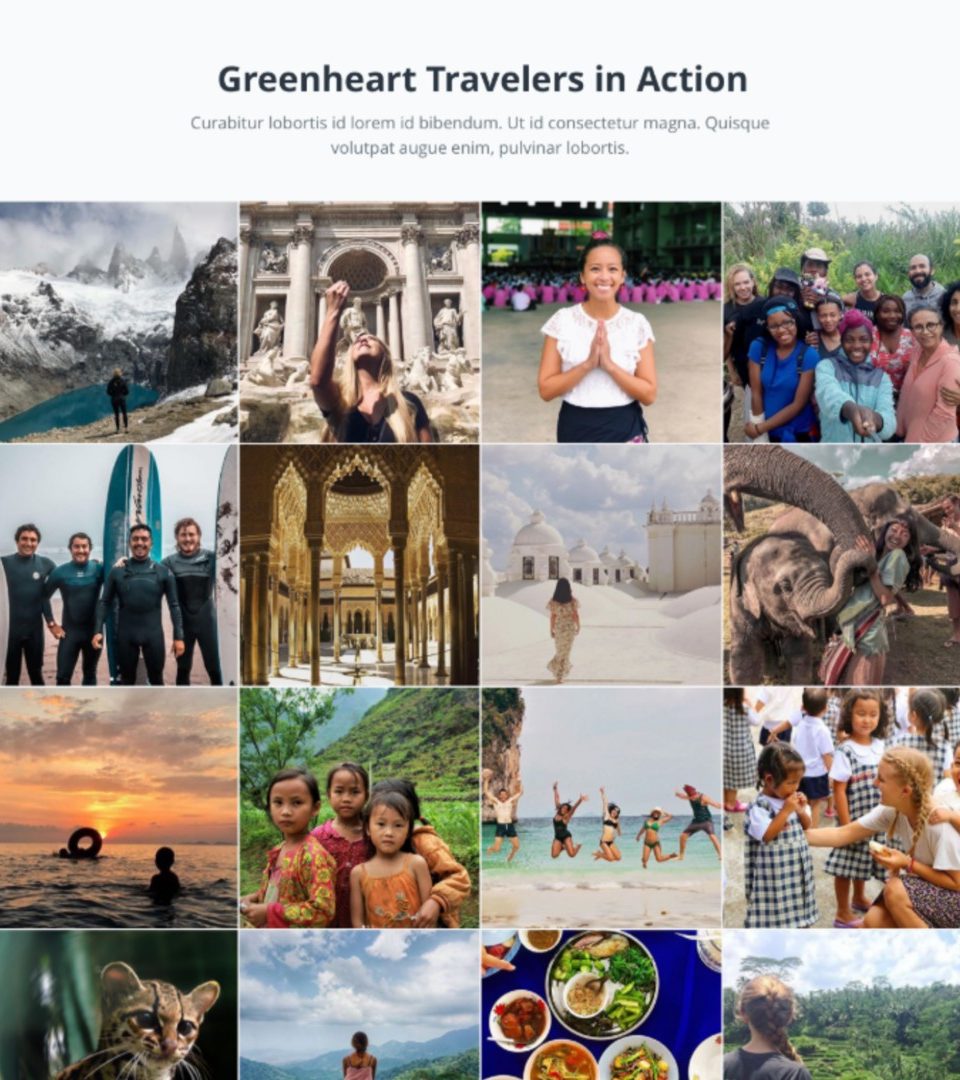 Creating Global Citizens Through Cultural Exchange – Greenheart Travel provide programs that allow travelers to experience a new culture and share with others about their own, bringing more understanding and compassion to the world we live in.

Greenheart Travel is a branch of Greenheart International, a 501(c)(3) non-profit organization committed to connecting people and planet to create a more peaceful and sustainable global community.

Greenheart trusts Q Studio and we trust them back – and this mutual trust helper to builds confidence, which liberates us to do what we are good at, building bulletproof applications in WordPress.

Of all the Greenheart sites we had rebuilt, over a multi-year process, Travel was perhaps the simplest in terms of technology, but the most intensive in terms of content – we knew the audit process would be extensive, once we found out they had over 4000 blog posts to review…

To see a detailed analysis of this project, read on below. 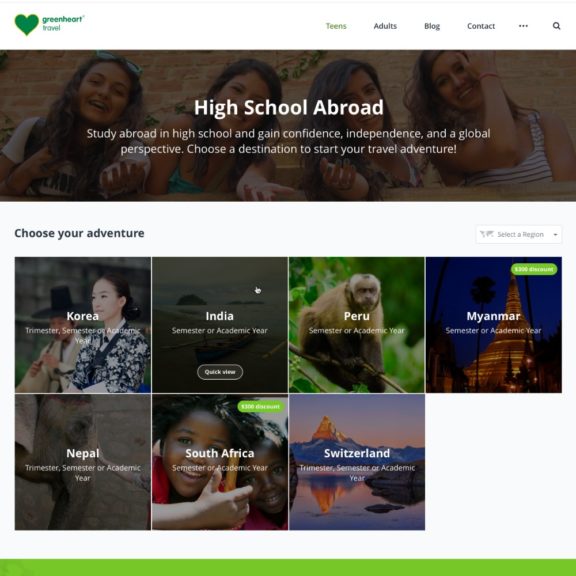 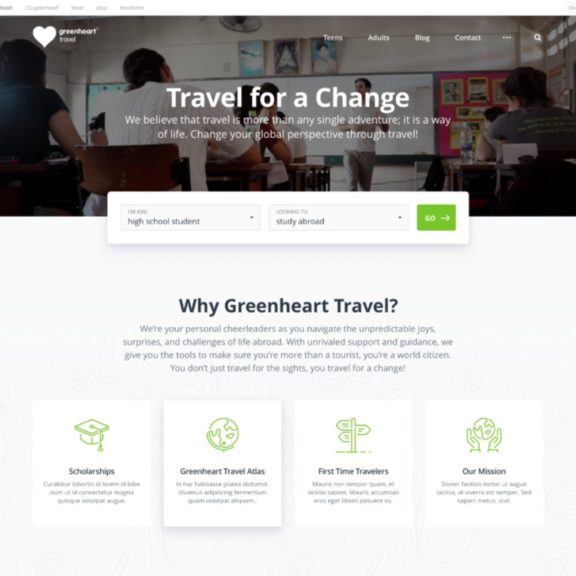 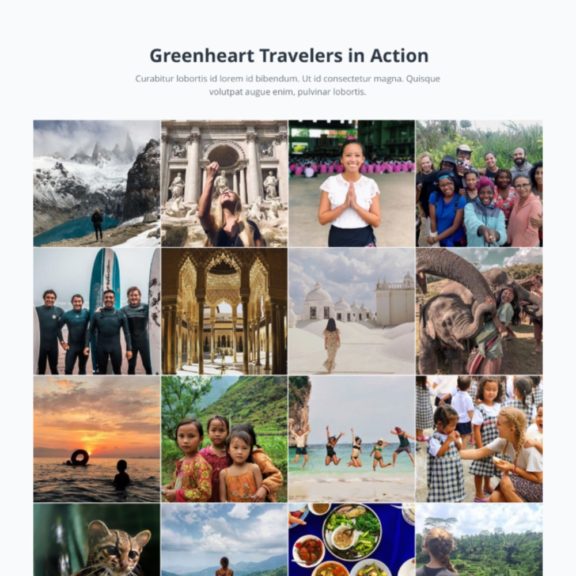 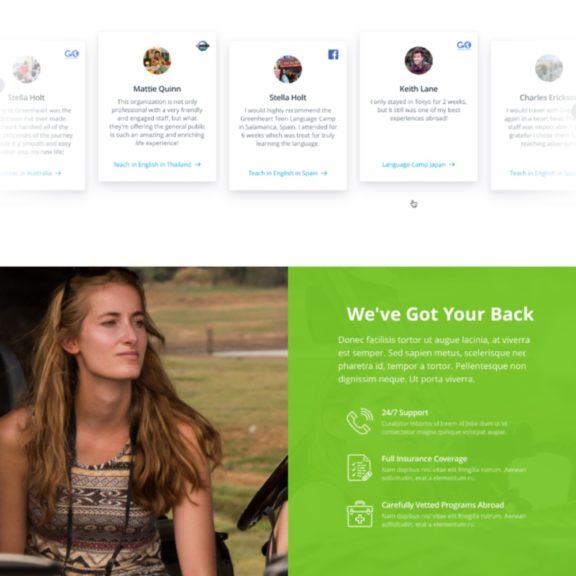 In order to arrive at a concept, it is imperative to fully understand the core needs and resources available – resources can be time, money, enthusiasm or any other measurable value that will have an influence on the outcome of the project.

Travel had an overflow of data and the metrics available showed that a lot of it was dead-weight, but of course, all data seems important, especially to the people who wrote it.

But, we were able to demonstrate that the size of the content was a burden, not a benefit to their business goals, and the sheer volume of content was adding a massive maintenance cost, without being able to justify it – so the main results of the audit was a huge reduction and re-organisation of this data hoard.

The next important pieces to juggle were the programs themselves, the core product Travel produces and sells – these clearly were suffering from some internal confusion – like most large organisations, Greenheart has it’s own language of acronyms and labels, which make perfect sense ( and also save time ) in an office day-to-day sense, but their meaning was less clear to their end-users – so we needed to simplify the language and clarify the organisation from the viewpoint of the audience also.

Travel provides program placements around the entire world, which vary in length, requirements, qualification and several other important features – so it was also important to start to visualize a search tool complete enough, yet still user-friendly, which would allow their audience to quickly locate the right programs for them, and then take the next action and apply.

Travel, like the other Greenheart projects we rebuilt, would carry a global branding bar and their themed version of the organisation logo – but they also wanted to have some unique identity and visual flavour – of all the branches of Greenheart, their audience was the youngest and most tech-savvy.

Designated committees were established for design reviews to ensure that the input of all stakeholders was taken into account, while this proved to be a slow process due to the broad demographic providing feedback, the end results were accepted as a good compromise of the many differing views.

As ever, we used the excellent Invision App for both prototyping and concept presentation, the ability to present in various formats, including inline commenting allowed us to gather a vast amount of contextually relevant feedback while offering an excellent UX to those reviewing.

It was decided to produce dedicated device designs, rather than a single responsive one, this added to the overall budget, but did allow for granular control over the UI, which was very important mostly due to the major demographic divide – most participants were young adults, more likely to view and apply for programs via mobile devices, where as the Greenheart Travel staff were more likely to edit content and applications via a browser.

You can see some of the final designs in the gallery above or visit the website to see it in action.

Knowing the level of complexity and projected length of this project, it was important to get a head-start on certain high-level technical aspects before the visual concepts were sign-off and ready – given the headless nature of APIs and data integrations, it was clear where our development team could get started.

The new Travel site has a central theme – showcasing their programs, educating their audience about the features and leading users to start an application process – so we had very clear funnels to develop towards.

Data was to be captured and validated on the WordPress site and also integrated to SalesForce for lead-generation & marketing purposes – these two steps started from within technically distinct features, with data merging at later points in the application process.

Thanks to the carefully scoped project requirements, our development team was also able to start work easily on the base aspects of the dedicated WordPress plugins and themes, which would form the backbone of the new application.

The development team created a rock-solid technical foundation, with working integration prototypes and had a AJAX powered search tool ready and working, based on concepts sketched out during the shaping process.

Once all the designs had final topl-level approval, our development team applied final touches to the templates and handed over to the UI team to do their magic and bring the skeletons to life with color and movement – all made easier thank to Zeplin, of course 🙂

Planned support starts before the first issue is reported – by putting in place a solid system to receive, allocate and track requests from inception to completion.

Q Studio provides full technical support to Greenheart Travels on all the systems we built, along with running planned maintenance and upgrades to both WordPress and other 3rd party tools – as well as uptime monitoring and server support.

But, the key to support is not between ourselves and our client, it is between the client and their own clients – the users of the application.

Q Studio provides in-depth training along with documentation on all the tools that we provide, including on WordPress itself, if requested – a support representative is much more effective and confident when they are well-versed in the workings of the tools they are tasked with using and understanding how things work on a conceptual level is key to that.